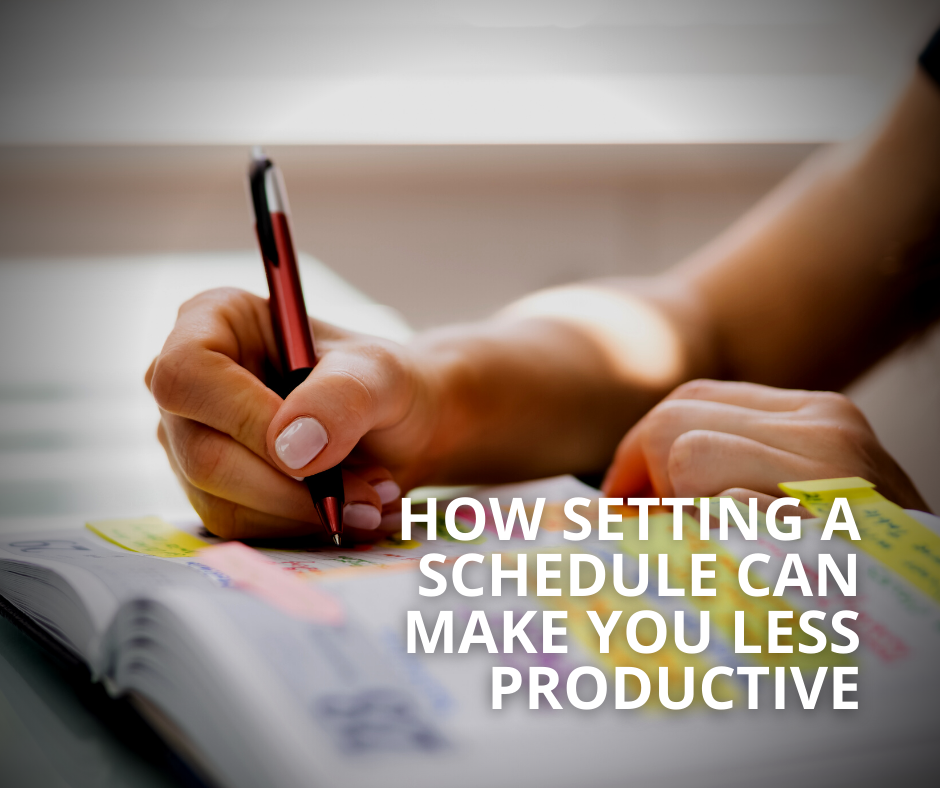 How setting a schedule can make you less productive

Ticking away the moments that make up a dull day.

There’s a relatively new term to describe this feeling: time famine, or the sensation of having too much to do without enough time to do it.

In order to structure what little time we feel we have, one strategy we deploy is scheduling. In fact, reliance on organizational tools like daily planners has been on the rise. In two recent surveys, 51 percent of respondents said they regularly used their calendar app, while 63 percent of office workers consider calendars “very important.”

The idea is that scheduling will make you more efficient: When you allocate your time, it organizes your day into a series of appointments, meetings, and calls, while blocking off free time for other activities or tasks.

But in a series of eight studies, Gabriela Tonietto, Steve Nowlis and I found that scheduling can sometimes backfire – and actually make us less productive.

An appointment approaches – and time ‘shrinks’

Much of scheduling’s downside has to do with the anticipation of a meeting or appointment. When we know a scheduled meeting or phone call is looming, it can make us feel like we have less time to do what we need to do.

In one study, we asked attendees of an academic conference whether they would go to the presidential address taking place about an hour later. Some said they would, and others said they wouldn’t. Those who planned to attend the address reported that the hour leading up to it felt shorter.

In another study, we had half of the participants imagine that a friend would be coming over in an hour, while the other half were told to imagine they had no plans. We asked all of the participants how many minutes they “subjectively” felt like they could spend reading during that same hour.

So the presence of an upcoming activity seems to have shrunk how much time people felt they had to do something.

We believe that when there’s an appointment looming, we direct our attention to it, whether it’s mentally preparing for it or simply dreading it. This makes the future appointment feel more substantial; as a result, the time interval leading up to the scheduled activity feels limited and insufficient.

But in the end, you still have the same amount of time leading up to a scheduled event.

So feeling like you have less time shouldn’t really matter, right? But it does. The feeling by itself can influence what people decide to do.

We know that when something is scarce, people consider it more valuable and are less willing to part with it.

The same is true for time. If time feels limited, people are less likely to use it – even when it’s in their best interest.

So in another study, we gave participants an empty calendar for the next day and asked them to fill it up, as accurately as possible, with what they had scheduled (including preparation or transition times). This allowed us to correctly calculate how much free time they had in between each planned event.

On our end, we strategically chose the hour-long window for the participants. We told half of them that the study would take place within an hour of an event they’d scheduled. The other half would take the study during a time period that concluded with a half-hour cushion before their scheduled event.

We found that participants in the first group were much less likely to choose the longer but more lucrative study – despite having more than enough time to complete the study.

In yet another study, we wondered if the mere reminder of an upcoming event could have a similar effect.

For those in the latter group, the simple mention of “starting something” was enough to change their behavior. We found that they engaged in significantly fewer activities, whether it was answering emails or checking social media, in this short five-minute period.

You’re less famished than you think

Some might think that time famine arises because they have too much to do and not enough time to do it.

While this may certainly be the case at times, our results suggest that the fault also lies in our own perception of what we feel can be done with the time we have. In other words, it’s important to realize that we might be contributing to our time famine.

If you love scheduling and planning out your days, a trick could be to schedule events or tasks back-to-back, which leaves you with larger chunks of unscheduled time. Several uninterrupted hours of unscheduled time will feel longer, especially if there’s nothing scheduled looming.

It can be effective to remind yourself that time isn’t as short as it feels. Even if you don’t think you’ll have enough time to complete something, you can still start a task and finish it later.

As Aristotle once said, “Well begun is half done.”

The opinions voiced in this material are for general information only and are not intended to provide specific advice or recommendations for any individual.

This article was prepared by RSW Publishing.

RSW Publishing has an agreement to republish this authors' content.